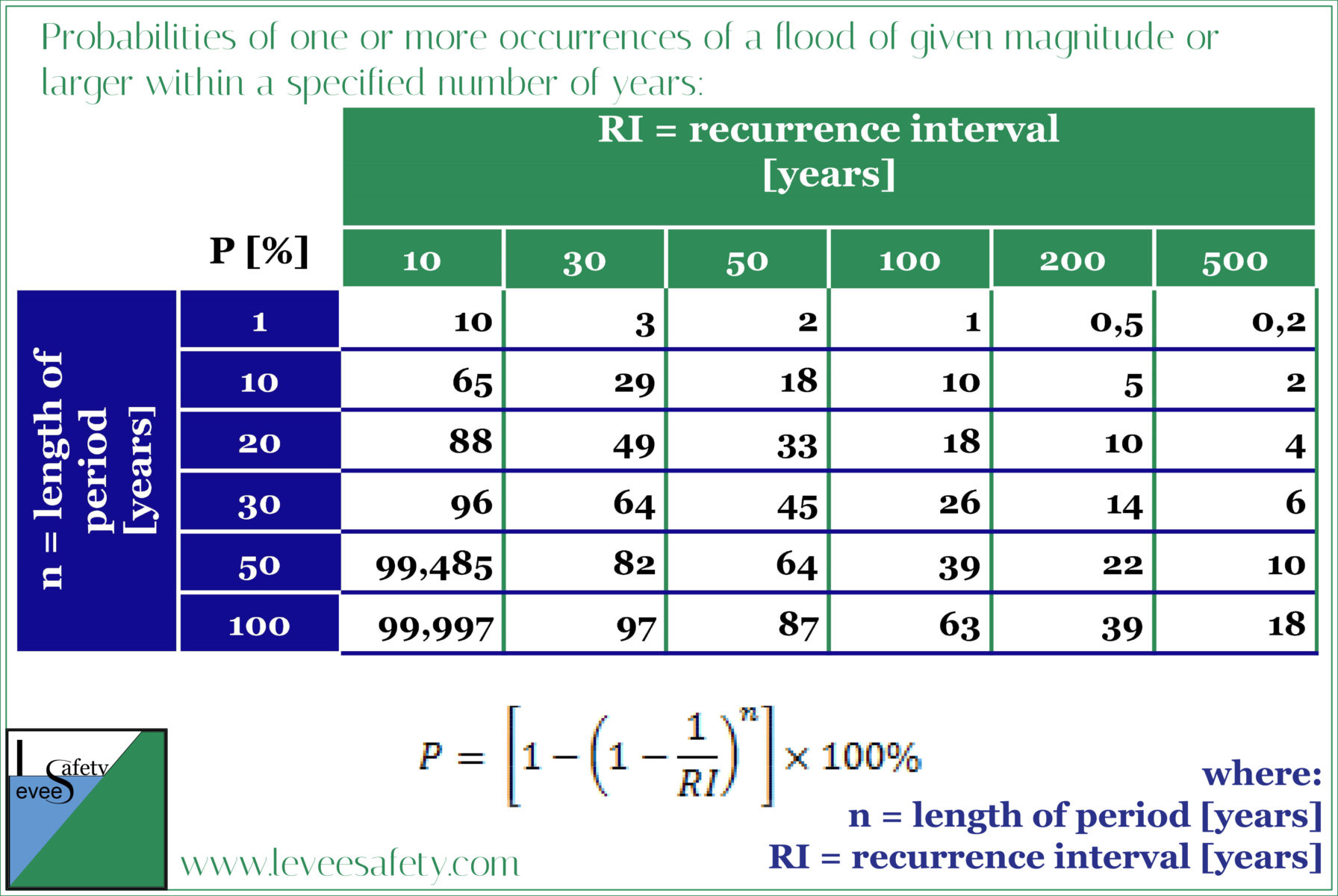 Levees provide for the safe conveyance of water and reduce damage caused by floodwaters.

Levees reduce flood risk but do not eliminate it.

It is essential to recognize that levees cannot protect against all possible levels of flooding and to distinguish between:

Levees are designed and constructed to withstand flooding of a specific magnitude. For example, a levee designed to exclude a 1-in-200-year flood may be overtopped by a larger flood.

Riverine flooding is the result of heavy or prolonged rainfall or snowmelt. Moreover, in urban areas, flooding can be caused by poor drainage. In coastal areas subject to tidal effects, flooding can result from wind-driven and prolonged high tides, poor drainage, storm surges with waves and tsunamis.

Flood characteristics, useful in analyzing the flood threat, are:

Floodwater can impose hydrostatic forces on buildings which result from the static mass of water acting on any point where floodwater contacts a structure. They are equal in all directions; increase linearly as the depth of water increases and always act normally to the surfaces on which they are applied. Water depths greater than 3 feet can often create hydrostatic forces with enough load to cause structural damage (FEMA).

Determining the expected flood depth at a site is critical for the overall determination of flood-related hazards.

Debris impact is a flood hazard directly related to flood characteristics (depth, velocity, rate of rise and fall) with respect to upstream site characteristics. Rising floodwater can dislodge objects of all types and sizes and high-velocity and flash floodwater may transport the debris downstream and hazard any object that intersects its path.

Base flood is defined as the flood having a 1-percent chance of being equaled or exceeded in any given year.

Base flood elevation (BFE) is the elevation to which floodwaters rise during a base flood.

Design flood elevation (DFE) refers to the locally adopted regulatory flood elevation. Typically, the DFE is the BFE plus any freeboard adopted. Freeboard means a factor of safety usually expressed in feet above a flood level. It tends to compensate for the many unknown factors that could contribute to flood heights greater than the height calculated for a selected size flood and floodway conditions. The DFE is always equal to or greater than the BFE and includes wave effects.

Flood studies present flood elevations of varying frequency, areas inundated by the various magnitudes of flooding and floodway boundaries. This information, presented on maps and based on detailed study and analysis, including historic meteorological, hydrologic and hydraulic data, may be used to determine floodplain limits, flood depth, flood elevation and flood frequency.

Discharges are determined for various locations and flood frequencies along the stream. Flood profiles depict various flood frequency and channel bottom elevations along each studied stream. For example, discharges and water-surface elevations for the 10-, 50-, 100- and 500-year floods (which have annual exceedance probabilities of 10, 2, 1, and 0.2 %, respectively) are presented.

DIDN’T FIND WHAT YOU NEED?